As good as it gets….

The night was calm, hardly any wind and most importantly, not a cloud in sight. Luckily the Zurrieq station was all set – we had just finished a scheduled round of maintenance that same afternoon (cleaning of the scope, resetting the motor and doing minor realignment).

These are the sightings as detected by the lunaves scanner for Saturday (every 30 mins): 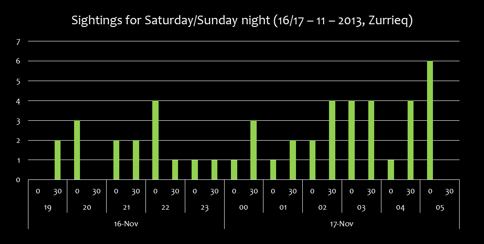 1. Unlike previous September nights, we had uniform migration across all night. In September most of the sightings were concentrated between 22.00 and 23.00. For instance we had a lot like this type of pattern a month earlier:

2. Unlike September sightings where we used to have a mix of small/bigger birds, this time round we had only smaller sightings. So either all birds were flying very high or else it was mainly a migration of smaller passerines (we are still working on getting a better reading of the distance of sighting) . Here and here and are a couple of videos for the record (keep your eye below the white trajectory line, video has slow motion)- nothing spectacular really, but they are just as valid!

3. We  compared notes with captures made during a ringing session on Sunday morning (worth noting that this was the same session where the first Malta record for the Red-flanked Bluetail was recorded, much to the delight of ringer Joe Mangion). The main observations from the ringing session were:

This entry was posted in 2013 Autumn Moonwatch. Bookmark the permalink.