Although we had great results with the trials in Malta, it was always  clear that we had to deploy the setup on a major migratory route to see if it cut the mustard.  Throughout the past few months we had been in correspondence with Dr Keith Bensusan and Mr Charles Perez from GONHS (www.gonhs.org). Luckily for us both Keith and Charles were extremely supportive and cooperative and so here we are in Gibraltar setting up the first unit! 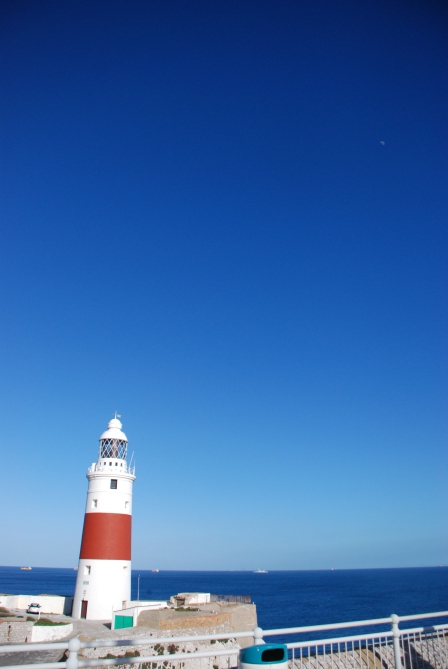 The lighthouse at Punta Europa, with a barely visible day moon in the top left corner

Over the past two days we have surveyed various possible sites where to put the setup. Interestingly enough there are three challenges that are very unique to this place:

1. The Rock – most of Gibraltar lies in the shadow of the massive limestone promotary on its side (the famous Pillar of Hercules). Direct sunlight does not hit the lower plane before 11.00am, which at night means that the moon will not show up before half of the night is over. One solution for this is to find a spot that lies at the Southern  or Northernmost  part of Gibraltar, thus avoiding the shadow

The southern end of the rock

2. The Cloud – when the wind is blowing from the East, a localized weather system forms such that there is a cloud that forms on the Western part of the promontary, this obscuring the visibility of the sky and hence the moon.

2. The Gulls  – there is a huge colony of gulls across the ridge of the rock and they fly around day and night.  That means that any data that we collect will get skewed with gull sightings unless we find a way around this. Again, the most obvious solution is to find a spot that lies away from the rock where the gulls tend to hang out.

Last night we set a unit out at the Botanical Gardens and finished calibration and training – Charles seems to have got the hang of it very quickly so all is looking very promising.  Over the next few weeks it is likely that we will move the unit to a terrace in a private apartment closer to the airport – it lies outside of the shadow of the rock and further away from the gulls. From a security perspective it will also be quite safe.

Today the weather was not very collaborative and hence any attempts of moonwatching would have been futile – this is the view across Gibraltar Bay of the before the impending storm (http://www.bbc.co.uk/news/uk-26095937).

This entry was posted in Our stations. Bookmark the permalink.